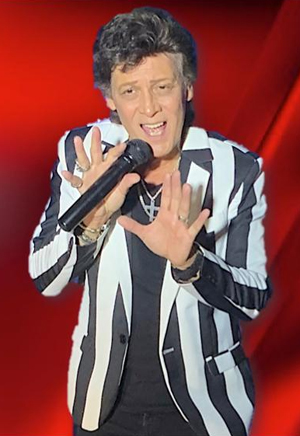 Roy Michaels is a seasoned professional with thirty-plus years experience entertaining. Like so many others, it was The Beatles who inspired Roy to pick up the guitar and start singing. By age sixteen he was already making many appearances in and around the Boston area. Roys band, Dutch Treat worked for many years as the house band for the Chateau Deville, which at the time was “The venue” for weddings and corporate events.

In 1977 Roy moved to Europe where he worked with many artists such as Shocking Blue (I’m Your Venus). He worked closely with Dreis Holten, a prolific hit making producer and recorded his first single, All Alone am I.

Moving from Europe to Florida, Roy performed solo and with various bands, highlighted by several years of travel as a member of The Kenny Martel Concept, a high energy, ten piece show, based in Fort Lauderdale.

Returning to South Florida in 2009 Roy has focused his attention on producing his own new Vegas style show called The Music of Our Lives. It features manny songs that will bring back memories and surely put a smile on your face or perhaps bring a tear to your eye. His repertoire includes songs from Billy Holiday to Rod Stewart and just about everything in between. Whether it be standards, top 40, Fox Trots or the Texas Two Step, Roy’s versitility is sure to connect with audiences of all ages.
Roy has appeared on “The Bob Braun Show” in Cincinnati Ohio, ” Good Morning New York” NY City, “PM Magazine” S. Florida. He has opened for Dionne Warwick and has recorded demo tracks for Julio Iglesias.
From 2010 until 2013 Roy stepped in to replace the late, great Johnny Maestro as the lead vocalist for the legedary band “The Brooklyn Bridge”

Everywhere Roy appears, the response is always the same..” His show is not only entertaining but uplifting as well.” Everyone in his audience will walk away with a small piece of Roy in their hearts….there’s still plenty to go around.