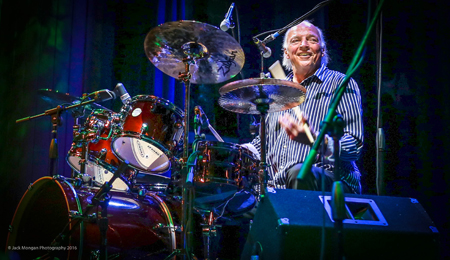 Peter Rivera was born and raised in Detroit. His father worked in a factory while his Mother stayed home.  When he was 9, a music store salesmen came to the house and sold his folks on a 30 music lesson package on the drums.  Although Peter played on stage at the age of 5 with spoons to a record his dad gave him, he had no other musical experience in an otherwise normal childhood.  He had no choice but to quit after only three lessons since his family could not afford it.  For years Peter practiced his drumming on an old beat-up snare drum that he got for Christmas to the sounds of a record player, learning tempo and rhythm.  After saving his money from working 2 paper routes, Peter bought a set of gold sparkle drums.  This was the start of a long and successful career behind the drums. After meeting a couple of guitar players, he formed his first band The Sultans.  They practiced for a couple of years until one day Peter was seen at a church social by the members of a popular band, the Sunliners.   The Sunliners asked Peter to audition, but they ended up not asking him to join their band.  One year later however, they saw him again and this time they wanted him. After tireless hard work and practice, The Sunliners eventually got a job playing in a run down nightclub 5 nights a week.  It was the start they needed.

As the years rolled on from club to club, The Sunliners were quickly becoming one of Detroit’s top bands.  The Sunliners had one problem though, lack of material.  Peter was asked if he could sing to bring some new sound and material to the setlist.  Peter started singing two songs but quickly his performances grew to thirty songs every night!

Being in Detroit, Motown got wind of the band and offered to let them record for a few nights to see what they could do.  This was their “big break” into the recording industry. The Sunliners changed their name to Rare Earth and the album “Get Ready” came out and eventually sold millions.  They went on to record many gold and platinum albums, and had such hits as “Get Ready”, “Born To Wander”, “(I Know) I’m Losing You”, “Hey Big Brother”, and “I just want to Celebrate”. Years of touring took Peter all over the world, and in 1970 he married Dabar.  They had 43 years together until her untimely passing in 2013. They raised 3 children who all went on to professional sports careers. Today Peter tours and writes material for his musical projects and his latest Album is “It Is What It Is”. The music is exciting and speaks to everyone, and shows his life experience is written in his songs. Peter is considered to be one of the primer singers/drummers of all time.  He was the voice of all the Rare Earth hits as well as the man behind the drums. His passion for music and unsurpassed talent earn him standing ovations wherever he plays.